My name is Tina Hauer (originally Tina Bitney). Originally from the city of Sunnymead, California, which became Moreno Valley in 1984 along with cities Moreno and Edgemont.

I thought I wanted to be a Physical Education teacher, I loved playing sports and I was always a tom-boy. One of the first women’s libbers, I thought I could do anything a boy could do.  However, after highschool I completed two years at Riverside City College, got an AA degree, and walked into a naval recruiting office with my girlfriend who was trying to enlist, they got me instead.  After completing bootcamp in Orlando, Florida, the USN sent me all the way from Sunnymead CA to Coronado, CA (about a two hour drive) where my job for four years was the Commanding and Executive Officer’s receptionist at the Naval Amphibious School in Coronado. When my four year enlistment was up my Master Chief offered me a civil service job with the word processing pool and I grabbed it, and thank God I did! I spent the next 30 years working for the Navy as a technical writer/budget analyst/database management/website developer in Coronado at the Naval Air Station, North Island.  What a beautiful place to work for 35 years.

God had also sent me a wonderful man in 1988 and we married in 1990 on a boat in the ocean off of the San Diego Bay. We decided not to have children, but we have and have had plenty pets, all shapes and sizes throughout the years.

In 2000 a friend showed me an amulet necklace she had beaded and I was immediately obsessed and wanted to find out all about beading. I found the Shepherdess run by Marcie Stone where they had tons of beading classes all year round. I took classes from sooo many popular teachers for six years.

I couldn’t wait for classes to start so I bought books, beads, and tools so I could get home and start to bead. Annette Maggiora working at the Shepherdess helped me pick out colors for my first project, a bracelet from Diane Fitzgerald’s Zulu Beaded Chain Techniques book, and I’ve been hooked ever since. 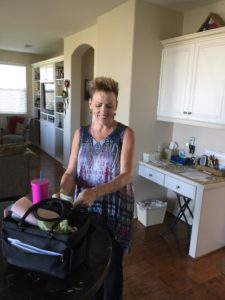